9/12 Iowa (2008 record: 8-4, 2008 result Iowa 17 Iowa St 5) – It would appear that both offenses are going to have big advantages over the defenses. Iowa State, with the spread offense, should have luck moving the ball down the field against a defense that will be missing its top two DB’s for the contest. The Hawkeyes will play a 4-3 defense that the Cyclones should be able to exploit. Iowa has a very good offensive line and should be able to lean on an undersized ISU front seven. However, the Hawks will most likely be missing OL starter Julian Vandervelde and the RB’s are still unproven. The Cyclones have won the last two against Iowa at Jack Trice and Iowa is team that gets better as the season moves along.
Prediction: Iowa State 30 Iowa 28
Win (55% chance of victory)

Ok, let's get this straight.... a team that had 10 losses last year (a current 10 game losing streak mind you), went winless in the Big XII, has a new coach/new system has a 55% chance to beat a nationally ranked Iowa team coming off a News Years bowl win, having won 6 out of their last 7 games.

Look, I know... I know... Iowa plays like donkey crap against ISU, especially in Jack Trice stadium. However, some of this stuff is just ridiculous.
Wait, wait there's more... check out the About Us page. 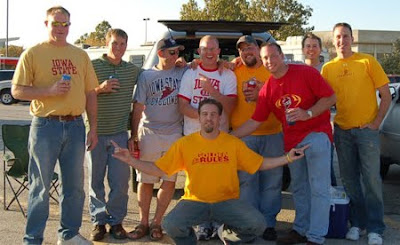