Huge Excitement Tempered with a Splash of Realism

Coming off a season that ended in New York City, playing for the N.I.T. Championship, Iowa Basketball now owns some of its highest expectations in over a decade.
I’ve always been an optimistic guy when it comes to Iowa Hawkeye sports (perhaps by definition, a homer, if you will).  Yes, I’m that guy who thought Todd Lickliter, in his third year as head coach of Iowa, might be able to get his team to finish in the top half of the Big Ten.  Yes, I’m that guy who thought maybe, just maybe, Iowa fans were being too hard on Steve Alford back in 2005.  And now I’m saying that while I think Iowa is going to be better than last year, fans and media might want to step back on their enthusiasm just a bit.  Wait.. What?!  It’s true.  Iowa has been labeled a “dark horse” so many times in the preseason, Black Beauty is jealous.  Rip Van Winkle thinks calling the Hawkeyes a “sleeper pick” has been overplayed.  Iowa being tabbed as this year’s “sexy pick” has Kate Upton… ok, you get the point, I’ll stop already. Sorry.
But why not get excited?  Why not eat up all the publicity and high preseason praises and go with the flow?  Be a man and pick Iowa to win the Big Ten!  No.  Why?  The short version – Iowa is basically the same team it was last season when it failed to win the essential resume-building games (Indiana and MSU), while losing a few resume-destroying games (Virginia Tech, Purdue, Nebraska).   The long version – keep reading....

With Iowa being officially on The Bubble (and currently about 4 or 5 teams away from the NCAA Tourney depending on which "expert" you believe), here are the teams you should be rooting for today. 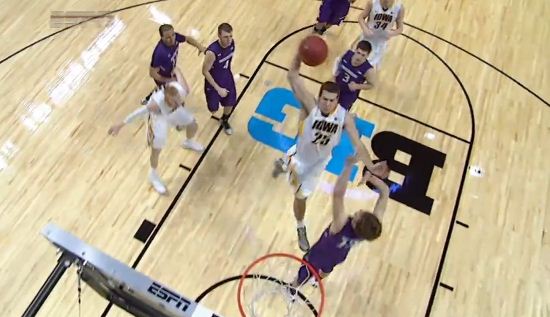 NC State over Virginia
Duke over Maryland
UTEP over Southern Miss
St Louis over Charlotte
Temple over UMASS
Vanderbilt over Kentucky
Butler over LaSalle
Tennessee over Alabama*
Missouri over Ole Miss
* - some debate to this as it could be a knock-out game regardless of who wins.


Iowa has to win tonight's game from MSU to get serious consideration for an at-large bid... they would need to win at least one more after that to feel really good about their chances.  However, one more might be enough depending on how the rest of the bubble goes.  So far this postseason, things have pretty much gone the best anyone could hope for in regards to helping out Iowa's chances.  The Hawks just need to keep winning, simple as that.

Once Again Hawkeyes Can’t Close, Lose to the Gophers

Once Again Hawkeyes Can’t Close, Lose to the Gophers