Preview - Prediction for the Iowa Men's Basketball vs. Wisconsin Badger is up on Hawkeyenation.

The Iowa Hawkeyes men’s basketball team looks to rebound after back-to-back losses today inside Carver-Hawkeye Arena.  This will be the sixth game for the Hawks in the past two weeks, as Iowa has had a game every third day to open the season.
READ THE REST OVER ON HAWKEYENATION.COM
Posted by storminspank at 11/26/2011 No comments:

My 2011-12 Season Preview and Prediction is up on Hawkeyenation.com 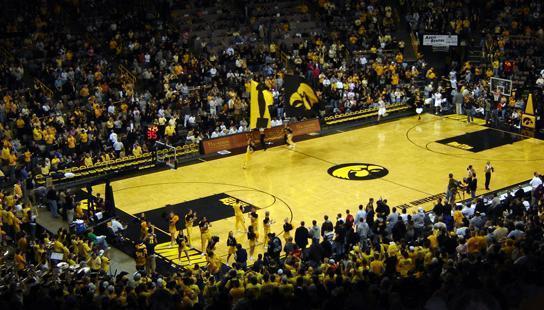 Give it a read.

My Thoughts on the Exhibtion Win over NWMS

Now up on Hawkeyenation.com is my article on the Iowa Hawkeyes recent win over Northwest Missouri State.

IOWA CITY, Iowa -- A total of 44 Big Ten men’s basketball conference games will be televised on CBS Sports or an ESPN network, the conference office announced Tuesday. CBS Sports will carry eight weekend games this season, while 36 contests will appear on ESPN, ESPN2 or ESPNU.

The Hawkeyes will appear on an ESPN network seven times (six during league play), the most since the 2006-07 season. Iowa also is one of three games that CBS Sports could select for one of its “Wildcard” selections.

Iowa’s first conference game against Nebraska (Thurs., Jan. 26) will tip-off at 6 p.m. on Mediacom Court at Carver-Hawkeye Arena and will be televised on ESPNU. Two weeks later, Iowa’s home contest versus Penn State (Sat., Feb. 4) will be carried on ESPNU at 2 p.m.

The Hawkeyes will host Wisconsin on Thursday, Feb. 23 at 8 p.m. That contest will be televised nationally on either ESPN or ESPN2. Iowa’s seventh game on an ESPN network was previously announced; a non-conference home game vs. Clemson on Tuesday, Nov. 29 at 8:15 p.m. on ESPNU.

Iowa’s home game against Indiana on Sunday, Feb. 19 is one of three games CBS can choose from. A decision on that game’s tip time and television network will be announced at a later date.
The Big Ten Men’s Basketball Tournament will be held March 8-11 at Conseco Fieldhouse in Indianapolis. With the expansion of the Big Ten to 12 teams, the tournament will feature 11 games for the first time in history. ESPN2 will carry the third and fourth games of the tournament, while ESPN will air Games 5 and 6. CBS Sports will once again broadcast the tournament’s semifinals and championship game.


The remainder of the Big Ten and Iowa’s men’s basketball conference schedule will be released tomorrow.

Here's a breakdown of the # of games per school per network:

HAWKEYE FOOTBALL: Get ON or Get OUT

It's been quiet on this little blog of mine with it being the off-season and all, also due to the fact that I started up a new site earlier in the year - BrewManiacs - with a couple other midwest friends.

The new Iowa Football video was awesome enough to bring me out of semi-hibernation.

Thank you SO MUCH to everyone who voted and supported us throughout the contest. Such an awesome feeling to have so many people helping you out!


Here are all the videos from Round One all the way to the finals:

And here is a tribute video to say thanks to everyone!

ONE DAY LEFT TO VOTE!

PLEASE go to CaseysMadness.com and vote for JUSTIN V.

We are in the Final Four. My 2 year old and I need all the help we can get!!

Just one round away from the championship!!

If you can pass this link along to your friends and family, that would be awesome! The more votes we can get, the better. Send it to co-workers, friends of co-workers, pets of co-workers, whoever you can think of. We need the votes this time!!! Voting ends this SATURDAY at 4 PM CST.

THANKS FOR ALL YOUR SUPPORT!!
Posted by Justin VanLaere at 3/24/2011 No comments:

I used my Roadie Hawkeye Homer Card for this one.

P/P is up on Hawkeyenation.com

Jon Miller of Hawkeyenation.com just wrote one of the best pieces I have every read in regards to Iowa Football. It came at a place in time where someone had to make a stand and let the national media know that they are out of line. Several Hawkeye fans have gone to Twitter to let the national pundits know that they are wrong, but this article went beyond that. Hopefully guys like Pat Forde and Gregg Doyel read it, but I'm not sure they will. Listening to reason hasn't their strong suit as of late. A big thank you to Jon for writing this. A truly fantastic piece.

Read all about it here:

My first edition of the Hawkeye Basketball Mailbag can be found on Hawkeyenation.com.

Give it a read.

We talked about basketball. It was fun.