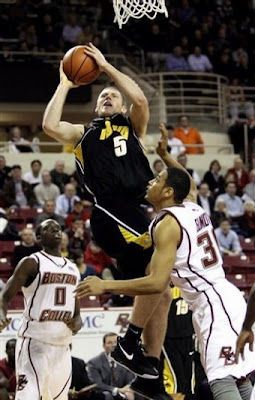 Super frosh, Matt Gatens, is quietly having one of the better freshman campaigns in recent Iowa Hawkeye Basketball history.

Yet the biggest stat thus far, in my opinion, is his FT%. Matt has shot 31 FTs so far and missed just 1 of them (the miss came in the second half of the second game of the season). So while the amount FTs isn't remarkable, the percentage is (97%). Furthermore, if you go back to that miss against UTSA, Matt has now made 24 consecutive free throws. I don't know where that places him in the nation in regards to that sort of stat or where that ranks him all-time for freshmen... but I do know this. Matt is now just 10 consecutive FTs away from tying the late, great, Chris Street, for the Iowa record. So what is Matt to do? Whether he gets to that 33rd/34th in a row in the next couple games or even a couple years down the road, he will have a quasi-dilemma on his hands. What does he do? Does he miss that 35th intentionally or does he sink it and wipe Chris' record out of the record books. I know it might depend on the situation (or maybe it doesn't matter at all in the end), but it's something to think about.